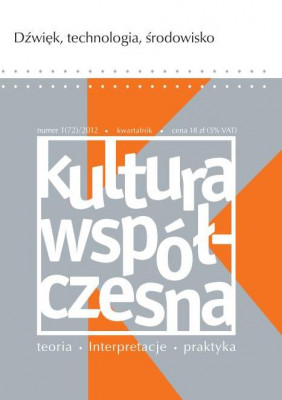 The text constitutes an attempt at introduction of the concepts used to describe a sound object in Traité des objets musicaux (Treatise on Musical Objects) (1966) by Pierre Schaeffer with special consideration of their metaphorical meaning. Such notions as form, matter, mass, texture, granularity and movement concern the senses of vision, touch as well as fictitious sound sources. Modern comments on the treatise as well as linguistic (especially cognitive) studies on metaphor are helpful in their interpretation. With the help of new vocabulary Schaeffer conveys the ideas reflecting important changes in understanding of sound and composition.

Until today, however, few scientists see the difference of “concrete attitude” within the 20th century experimental desires linked to application of electronic technologies. It seems that concrete music, especially in its ideological plane, still remains undiscovered. However, today it demands this discovery itself, so to speak. Because while during the times of its development concrete music stood in a distinct opposition to traditional attitudes within sound art, presently – mainly because of the development and propagation of new technologies of sound media – it constitutes an inherent element of musical culture of the 21st century. The element, however, usually unrealized. The article’s objective is to open a discussion on various contexts of the relevance of concrete music and indicate at the need for interdisciplinary studies in this field.

While scientists and philosophers discuss the presence and meaning of technology in the world – artists have been for years successfully referring to scientific benefits and new technologies, not only with regard to the media. While not underestimating the threats resulting from purely instrumental application of biocybernetics, Eveline Domnitch and Dmitri Gelfand indicate at a positive potential of the art referring to the achievements of natural sciences and experiments. The sound art proposed by them assumes crossing the conventional boundaries between science and art, which – understood as two parts of the same whole – participate in the shaping of human life environment.

The text is a presentation of modern art and its esthetics with special consideration of art works using spatial dimension and environmentality. I suggest three qualities as indicators of evaluation of such art works. These include stability, contextuality and immersion. I confront the evolution of art forms with postulates regarding ecological art. I formulate axioms concerning the notion of environment and reconstruct symbols and meanings attributed to this notion. I use the texts of estheticians and ecologists. I comment on the phenomena of advertising and fashion in order to show against this background how a potential place for realization of acoustic sculptures is created.

Electroacoustic categories in the tradition of sound landscape - Maksymilian Kapelański

The authenticity of sounds. Cultural context of schizophonia - Robert Losiak

The article is an attempt at analysis of the phenomenon of “schizophonia” which was named and introduced into reflection on the sound landscape by R. Murray Schafer, thus determining perceptual situation in which sound message is separated from its source. The essence of schizophonia consists in the feeling of “splitting” of visual and phonic experience. The article poses a question whether the experience of schizophonia constitutes – as Schafer convinces – an objective threat to sound environment, resulting from modern transformations of sound transmission technology, or is it rather an expression of a certain state of phonic consciousness, culturally influenced and for this reason relative and variable. It seems that schizophonia is determined by the whole series of situational, semantic and axiotic contexts, which questions the technological determinant of this experience. Hence, the thesis to recognize schizophonia as a category in cultural studies, describing the problem of audiosphere experiences as a cultural problem by its very nature.

The article’s objective was to identify the role of sound landscapes in modern culture. Going beyond the purely theoretical approach, interesting initiatives allowing for discovery of sound landscapes and creation of favorable conditions for development of the listening culture were described. The programs of the European Capitals of Culture and other regional, national and international projects were discussed. The characterized activities as well as grass-roots initiatives distributed in the cyberspace support popularization of culture and education and allow to discover the unusual in everyday things.

The appearance of a new music recording format in the form of mp3 files resulted in the sense of serious crisis of musical culture, which is demonstrated not only in a drastically decreasing number of the sold records but also in a widespread belief in trivialization of the approach to music. In this essay I am trying to interpret these processes in the context of dematerialization of music carriers. For this purpose I’m using a category of listening body in order to depict how a listener becomes involved in the process of listening by various media. Therefore I am trying to present the crisis related to digitalization of music as a network of multidirectional flows between the development of sound recording technology, transformations of space in which the process of listening takes place and bodily practices of music reception. As a result I conclude that a key transformation related to the appearance of mp3 files regards conceptualization of the listening body, which ceases to be perceived as a tool for consumption of the selected musical offer and becomes coordinated with a complex phonosphere remaining beyond the individual control.

The article’s subject are the concepts which express desymbolizating aspirations – the projects resigning from the category of a symbol or weakening the symbolization relation. The problem concerns symbolization as cultural relationship – when something, which is perceivable through the senses, represents something else on the strength of mental associations. The relation of symbolization might be an axiological relation, if the thing that is symbolized is value; when what is symbolized is an object, property or situation, then we are speaking of semantic symbolization, that is an objective reference relation. Symbolophobia is a liquidation of symbolization, which is possible because of rejection of impressions-types level, while it is impossible to attribute single idiosyncratic applications of specimens with a permanent objective references. The concentration on the aesthetic aspect of the symbol does not consist in syncratic “contemplation” – the individual visual form of the symbol is irrelevant with regard to pure syntax.

The article explores the subject of the prescription as a literacy artifact. The author treats this document as a peculiar performative and attempts to reconstruct its felicity conditions. Using the knowledge of anthropology of the word, he intends to specify the philological, historical and cultural context in which the prescription appears and to determine its components and the cultural practice in which it participates. He demonstrates how different media – orality, writing, print and digital signs contribute harmoniously to the content of this document. The prescription turns out to be an unusually procedural phenomenon (the same as the magical formula) and also an independent one; we may discern in it the remains of magical, religious and trade functions. The analysis of the prescription is the starting point for the discussion on culture that became bureaucratic when dominated by writing.