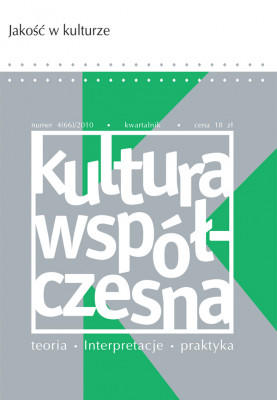 A few remarks on problems with valorising in culture - Marek Krajewski, Anna Zeidler-Janiszewska

A way to approach the criteria of evaluation of art, proposed in this issue of “Kultura Współczesna” is based on a simple observation according to which cultural goods are always primarily by someone and for someone, while cultural practices organised around them, are not only and exclusively reception and interpretation of a message created by an artist, but rather a complex process of establishing social relations, production of bonds as well as rules which organise our activities. In order to negotiate the criteria, which are of interest for us, first we need to check what is being done to art, artistic production and its effects by individuals who form a democratic community.

At least from mid 20th century, theatre performance has approached performances known from everyday life, popular culture and media. The latter in turn are systematically becoming more and more sensitive to every formal experiment in theatre art which can be applied by them. According to Jewsiewicki the excess of performance creates on the one hand a “political possibility” of pluralism and polyphony, an actualisation in performative practices of every individual or collective identity (without exception) under the sign of radical democracy. On the other hand, in the face of multitude of performative self-presentations and lack of clear criteria of judgement – it brings the risk of self-reception, a state where these identities will present themselves to themselves only. In the context of the “staging of memory” the responsibility for the course and form of the performance as well as its judgement is being transferred by an author to a viewer-citizen. However, there remains a question whether this viewer-citizen has appropriate tools for the critical analysis of performances which he/she watches or in which he/she participates. Based on the analysis of some chosen performances declaring their affinity with the artistic practice of theatre, this question is being posed in this article. An answer to the dilemmas described above which is being proposed in this article is a necessity of critical analysis of performativity in recent culture.

The author attempts at tracing and summing up the transformations within strategies and functions of art criticism in the last decades. Beginning with pessimistic diagnosis about today’s subordination of criticism, disappearance of evaluative perspective as well as transformation of critical texts into a kind of erudite, theoretical “veil” for art (J. Elkins, N. Carroll), the author is trying to divert their argument and point to some controversial aspects of the former model. The modernist idea of art as distinguished space of values and as a pattern of the ideal public sphere “in embryo,” characteristic for the thought of Arnold, Leavis or Greenberg, has seemingly empowered the status of criticism, supplied it with lawmaking prerogative, actually, however, could lead to its isolation, its apolitical closure in the circle of its own problems. Concentrating on American art criticism, the author is trying to show that problematic from today’s perspective “academicisation of criticism,” its “theoreticisation” has its premises also in this earlier, seemingly rejected perspective. Moreover, this theoretical saturation is to an extent a requirement contemporary art imposes on criticism – a way to deal with its conceptual complexity, inconstancy of attitudes and cultural contexts. Theoretical competence is therefore on the one hand a condition for understanding art, on the other – it is becoming a form of symbolic power, a tool in a battle for status of both the artist and the critic.

Since recently, the Dialogue of Four Cultures Festival seemed a model of partnership of the private and the public in the field of culture. This attempt of combining two rationalities: the logic of the working of the NGOs and that of the local government, failed and exposed the weakness of applied legal solutions. The authors are analysing the circumstances of the fall of the Dialogue of Four Cultures Festival and formulate proposals referring to the debate on the new forms of organisation of cultural institutions in Poland based on their analysis.

Dispute about the market - Grzegorz Dziamski

Under the slogan of the “dispute about the market” the author analyses the debate – activated in Poland after the Congress of Polish Culture, and lasting at least from 1989 onwards – on the relations between economy and culture in a close link to the role of the state. On the one side of this argument there are the neo-liberals for whom the fall of the Eastern block provides a decisive argument for the preponderance of market over other forms of the command and/or central economy. On the other side, there are opponents of the market who treat it as a threat of reducing all the values to the economic and exchange values, and then, in result, their common relativising and transformation of the society into a supermarket. The author claims that the state should not leave behind its tasks related to cultural politics and believe that the market shall solve all the problems of culture; instead, the state should support an innovative market and not the one which stabilises and remains suited to an already existing demand.

The rise of the new, digital and networked media calls for new theoretical and methodological approaches to research. As entrenched analytics such as the "participation in culture" prove increasingly irrelevant to the actual practices on the ground, how can we rethink the "studying culture" for the contemporary situation? This article follows the experiences of the collaboration within an ethnographic project "Młodzi i media" to offer reflections on an ethnographic approach to designing the research process and making the findings public.

Multi-sensual culture of the event. Where it came from, what are its symptoms and how should one judge cultural artefacts in its framework? - Tomasz Szlendak

The article presents the concept of multi-sensual culture of the event. Among the reasons for the existence of such a culture the author points to the following dispositions and structural limitations of individuals: de-concentration, disappearance of traditionally understood spare time and social compulsion to emit sensations. The author surveys the characteristics of multi-sensual culture of the event which include “framed” reception of culture, cultural omnivorousness, multi-sensual cultural preferences as well as cumulating of “flat” excitements and their immediate sharing. He also proposes an explanation of the difference between local varieties of multi-sensual culture, typical for egalitarian and stratified countries. The last part of the article is devoted to some evaluating intuitions. Among the proposals of new criteria to segregate the so-called class tastes there are the cultural omnivorousness and a number of black boxes, while among the proposals of the new criteria for evaluating cultural goods – number and status of net-connectors, placing the message in the net niche, ability to attract attention, mimetic contagiousness and openness to relationality.

The article presents most important theoretical and methodological issues considering the diagnosis of individual abilities related to the usage of visuality. Firstly, the author refers to the tradition of research on artistic competence, stressing the role of institutionalised school education in this context as well as pointing to the effects of such a perspective which reproduce social inequalities. Secondly, he deals with the competence understood as literacy, showing the differences between its representational and instrumental dimension. Thirdly, referring to the pictorial turn proposed by W.J.T. Mitchell, he points to six aspects which should be considered while analysing the visual competence.

Artist, entrepreneur, scholar and their work in the context of the professionalization of education and culture - Konrad Olesiewicz

Pointing to some possible analogies between artistic, scholarly activity and entrepreneurship, the article attempts at placing them in the common context of creative activities. Beginning with the presentation of common interpretation of the structure of development of particular disciplines, the author chooses as the subject of his analysis an individual – artist, scholar, entrepreneur – and then analyses the quality of their work. Further issue in the article is relating Kuhn’s idea of the paradigm to artistic activity and the characterisation of the artefacts as addressed to a receiver-expert as well as the analysis of it implications. The author introduces the notion of Schumpeter’s recombination as an example of entrepreneuring behaviour which finds its reflection in art and science, in order to subsequently discuss the problem of professionalization of the work of scholar and artist as well as emerging tensions between practice/utility and “truth”/art. In this context entrepreneurship seems to be a common denominator, a set of traits and behaviours which seem necessary to carry on artistic or scholarly activity in a professionalised and marketed educational sector as well as in the sector of culture and art which is also professionalising.

The article aims at an interpretation of the reading practices in the space of the Warsaw Access Rail (Warszawska Kolej Dojazdowa) from the perspective of the hyper-modernity theory. The reading practices are here shaped by the presence of official notifications and the surplus of time characteristic for one’s being in the non-places. A very specific proximity in mass communication influences the type of the strategies of intimate reading applied. What becomes a central analytic category in this context is the body of the reader.

A Pole, a “Ranch“ and a province. The mytho-graphical study of the series - Anna Kapusta

The fundamental area of analysis undertaken in this article is a detailed study of a Polish TV series A Ranch (a moral TV series, Poland 2007, film director: Wojciech Adamczyk, scenario: Robert Brutter, Jerzy Niemczyk, broadcasted: TVP1). The series analysed as a postmodernist transformation of mythical narration is a genre of the cultural text as well as an aesthetic yardstick of Polish social transformation of the “year 1989.” Schemes of mythical thinking: the characters conception, mythical accessories, genetic affinity with the literary national epic, which have become the pivot point of the plot construction, reveal the cultural transformation social mechanisms of the postmodernist: constructively perceived “province”.

The Desperate Housewives TV series presents a very well functioning system of neighbourly surveillance, based mostly on mutual spying on the neighbours by each other. The motif for spying is here not only curiosity but most of all the need for security which is not guaranteed by the state in its contemporary form. Neighbourly surveillance on Wisteria Lane is facilitated due to the shape of this street which reminds Bentham’s panopticon. Does the system operating on Wisteria Lane, however, lead to the internalisation of norms, as the inventor of the idea of panopticon would like it? And what else, beyond security, does it serve?