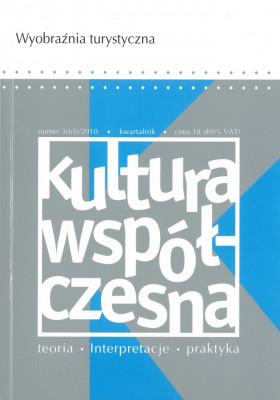 It has become increasingly difficult to write about tourism... Almost everything one does could be considered, with a bit of effort, as having a dimension of tourism. It is not difficult to see it in this kind of contact with different environments: social, cultural, and geographic, which we engage in while watching television; it is present in practices of everyday life when we buy various objects (clothes, elements of interior design) associated with exoticism; when we eat meals of the so-called ethnic cuisine. In that case, when everything is tourism, what is not? It seems necessary to reformulate the question: what makes tourism a perspective so theoretically expansive? Why does it suppress not only popular but also sociological and anthropological imagination? (It seems hard to deny that a model tourist has for good joined Weber's pilgrim and Benjamin's flâneur, thus becoming a figure, which serves to explain key phenomena of social life.) It is the notion of imagination, which has been the point of departure in the works on this issue of "Kultura Współczesna".

Journey and a melancholic experience of space - Kajetan Mojsak

The article interprets the journey in the framework of a "melancholic" experience of space. Melancholy - understood as longing without an object, "unfortunate longing for places where we are no more" - can be translated into this specific experience of space which can be an essential "hidden" motivation for travelling, also in its contemporary tourist form. It is an important mental dimension of journey and it can provide a key to the existential experience of journey and space allowing to combine scattered travel plots, hitherto interpreted separately. Longing for places "where we are no more" grows from the distance itself: a distant place becomes - according to the logic of the sublime - an object of desire, a charismatic point, organising space, distant psychic and spiritual centre. Melancholy of space is a phenomenon characteristic of late modernity and Western culture, impossible in traditional cultures. It generates a need for travelling and occurs as a tourist consumption of subsequent places, as a hunger of total space, which activates the following mechanisms: collecting (enumeration), rush, wandering and feeling at home in a journey.

On how photography created a contemporary tourist - Tomasz Ferenc

The author's aim is to provide a multi-dimensional description of relations between photography and tourism. Both disciplines are crucial elements of contemporary social life. They influence each other and shape a very specific form of experience: photographic tourist a. The article presents a genesis of such a gaze, its forms as well as sociological and psychological consequences. The author also shows the variety and multiplicity of the functions of photography used by the tourist industry, taken by the tourists themselves as well as by photographers aiming at critical analysis of mass tourism.

The author analyses a process of shaping of the tourist identity of women. Choosing particular examples from modernist and postmodernist literature, the author attempts mostly at a characterisation of female tourist imagination, pointing to correspondences between stereotypical, tourist experience of the city and the originality of female way of looking at its "views".

The article deals with practices related to mass tourism, especially sightseeing. The author treats the monuments as a form of sites of memory, which serve to legitimise power and fix collective identity in the eyes of a particular collective and its others. The argument is supported by the analysis of popular guidebooks, which proves that these publications concentrate mostly on the history of a particular country while guiding the tourists through monuments supporting national identity.

Pompous tourism? The terror of war as an attraction in tourist experience - Urszula Jarecka

The article is devoted to conceptualisation of "war" tourist attractions. Having characterised the field of study, the author presents classifications and characteristics of these attractions for which the common ground is the terror of war. She also discusses some interesting examples of arranging these attractions and the potential of "historical and war" tourism and sources of pleasure in the tourist experience of this kind. The author analyses such materials as: guide books, brochures and leaflets from museums and tourist information, city plans and maps of regions, official websites of chosen cities and sites of memory, souvenirs including magnets, mouse pads, pencils, postcards, etc.

In the open: from landscape to tourist natural environment - Beata Frydryczak

Asking about relations between tourism and nature, the author goes in the direction of the question on what nature is the tourist dealing with and how does she/he perceive it. Studying historical connections between tourism and nature, the author stresses an "aesthetic turn" in travelling (Judith Adler) and a visualisation of tourism (John Urry). She reaches to the source of today's tourism, relating it to the notion of the picturesque and William Gilpin, an initiator of picturesque journeys, in order to show a shift from an aesthetic landscape to tourist natural environment, understood here as a nature assimilated and subject to various treatments aimed at making it more attractive for the tourist market.

The author analyses two different modes of building the relations between the travelling subject and his/her environment. The first one is primarily organised by the domination of the visual, embodied in the category of the "landscape", while the latter - leaning towards the acoustic and based on the practices of listening - bears traces of an alternative economy of space organisation. Hence the categories of "soundwalking" and "aural safari," introduced within the field of sound art, are juxtaposed with the term, "soundspace" (as conceived by R. Murray Schäfer), to show how the latter, despite its strong connotations with aural phenomena, is rooted in the discourse of oculocentrism. The alternative mode of travelling, based on aural experience, is foremost contextual, processual and open to the emergent factors, while the dominance of vision is usually pervaded by the cultural logic of spectacle. The forms of mediations are symptomatic here; occupying the position of distanced viewer-observer in the case of field recording is not possible - on the contrary, the practice of soundwalking or aural safari encourages building relations with the environment as the network of connections through active listening where listener is positioned in the middle of the perceived phenomena.

Contemporary travel literature is clearly undergoing a transformation due to the influence of tourism, although the relations between them are multidimensional and lead to multiple solutions. For some writers mass tourism provides a negative point of reference, which aliows for distinguishing a clear anti-tourism trend, with its crucial manifesto by Daniel Kalder. In the second option we deal with complicated narrative play with codes both of tourism and the canon of literary journeys, which is framed in Poland by books by Zbigniew Herbert and Ryszard Kapuscinski. An example of such a strategy is Ignacy Karpowicz's hybrid relation from Ethiopia, whose narrator is a post-tourist using conventions of holiday consumption of guidebook attractions and a post-tourist aware of the rules of "high" tradition against which he writes. In the third option, however, (Wojciech Cejrowski, Beata Pawlikowska, Martyna Wojciechowska) what is most important is a construction in multimedia message a strong self-portrait of "authentic" traveller, and, at the same time, creating an attractive narrative offering to the reader specific media "lure" or an ideology as a mission.

The author deals with tourist narratives subject to two philosophies of representation: mimetic and performative. These issues are considered in the light of recent research in sociology: tourism, journey and media, theory of literature as well as philosophy of history. Setting these as a background, the author points to relations between narration, identity and travelling. A separate place has been devoted also to the relations between cultural texts (literary, visual and audiovisual) and tourist narratives as well as the participation of the latter ones both in creating contemporary culture of visibility and in designing the tourist experience itself.

The article is an attempt at introducing several research perspectives dealing with the problem of spatiality in computer games in the context of treating a player as a tourist. Among these are the following: Henry Jenkins' idea of "spatial histories," categorisation of 3D environments described by Michael Nitsche, as well as the analysis of social relations which accompany network games. A separate argument deals with a relationship between games and cinema as well as with the notion of "virtual camera" and mutual appropriations in both disciplines.

The author describes relatively little known aspect of the work of Kurt Schwitters, his activity in the field of design and advertising. Reaching beyond the opposition of Dadaism and Constructivism it became an element of a wider context of intermingling of these tendencies in the work of his fellow avant-garde artists such as Theo an Doesburg and El Lissitzky. As a creator and theoretician of advertisements Schwitters entered a current of modern functionalism thus expressing his affirmative attitude towards modernisation. At the same time, modern project of "building a new world" liberated from finalism, bearing in mind that an "organic growth" is always connected to the process of natural disintegration.

The article refers to Lev Manovich's reflection on the transformations of contemporary audiovisual laguage, which has taken place under the influence of digital technologies. Title "revolution" is supposed to illustrate scale and character of the process, which consisted in creating a simulation of functioning of the "old media" in new, digital environment, while the term "velvet" referred to its gradual and almost unnoticeable character. Contemporary language, according to the scholar is created due to ability to combine various visual techniques and is a new, hybrid form of expression.

Camp and glam are at present in popular culture promoted as styles and reduced to a narrow set of aesthetic qualities. Their source, historic senses, however, is to an equal degree connected with worldview and political issues. The article juxtaposes the narrow meaning of the notions of camp style and glam style with a wider aesthetic and cultural context formed by: queer as well as redefined notions of offensive aesthetism and contemporary dandyism. The aim of this article is to present a clear alternative to attempts at normative definition of camp and glam.