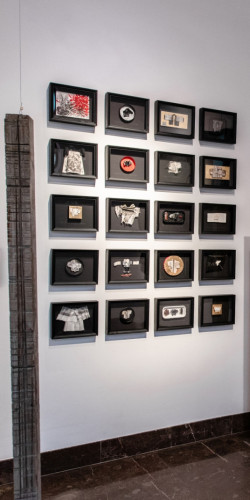 Elżbieta Banecka’s favorite material is paper – Japanese ronbun. She uses it to create structures inspired by kimonos – installations and assemblages caged in carton boxes as well as the subtle graphics.

For several years, Banecka has been drawing inspiration for her art from the Japanese culture. And it is not just a mere reception. I would state that her attitude towards the East is rather organic. She recalls the feeling of physical closeness and familiarity which accompanied her during her first stay in Osaka in 1991, where – still as a student – she received the brown medal in the International Triennial Competition of Print.

Through the exhibition organized at Kordegarda, the Gallery of the National Centre for Culture, she takes us on a meditative journey. Every single step leads to simmering down the reasoning intellect, in the East called the ‘monkey mind’, and directs us towards a transition, balance, peace, and inner liberation. Banecka’s journey involves stopping at every single detail of the observed world, paying attention to the most insignificant and trivial objects – a scrap of crêpe paper, fabric, a box, or a line of the raked gravel.

The artist’s favorite medium is paper, the Japanese ronbun from the title. She uses it to create structures inspired by kimonos – the installations and assemblages caged in carton boxes, and finally, the raw graphics. To Elżbieta Banecka, paper – being a slow medium – is like an ephemeral lover. She often mentions how challenging is to acquire the necessary material – handmade and dyed black paper produced in the process of papermaking or the original Japanese rice paper – transparent and as resistant as parchment. Of those sheets of paper, she creates micro- or macro-scale ‘origami’ imitating the cut and stitching of kimonos, men’s outerwear – haori, or white iromuji. The term ‘origami’ might be confusing, though. As it is not about the art of the intricate paper folding but rather about experimenting with spatial paper forms. Crumpling the paper is like overstepping the safety line; it initiates a stage of demystifying the medium, of transgression, and the peculiar rite of passage. Blurred shapes emerge from memory. Sometimes, they are mimetic, defined, relating to particular kimonos, and at times, they constitute abstractions, impressions, or an idea. Simplified, reduced to a sign, it hangs in the space determined by the even rhythm of lines created by the raked gravel in the Ryōan-ji garden.

The Japanese garden is Elżbieta Banecka’s other fascination. Paradoxical compactness and rawness of space are intricately connected to Zen mysticism. Here, time flows from the present towards the future. To describe the Japanese garden, it would be necessary to track the Eastern worldviews and perceptions – from Buddhism in India, through China, to Buddhism in Japan, to determine the vectors of interpermeating influences of Chinese Taoism, Confucianism, and finally, Japanese Zen. Sansui frozen in stone and gravel – rocks and water resistant to time represent the ideal harmony. If we listen carefully to the sound of a stone, we can achieve satori – the Buddhist awaking.

In Elżbieta Banecka’s graphic works, the Ryōan-ji garden is sometimes visibly present, while at other times, it is barely perceptible. Modulation of small sequences of numbers or spots relates to the raked gravel, being the image of water. The variable regularity of lines reminds of creations of nature. The color is also important. Elżbieta Banecka consciously limits the palette. To white, red, and black, she adds grey. And it is grey that involves a multitude of shades. According to Zen masters, grey is the queen of colors. The iridescent spots of pigment preserve the austerity and sophistication of the stone shaped and sculpted by time.

The triad of white, red, and black is deeply rooted both in the Eastern and Western cultures, it bears soteriological and magical meaning. It plays a vital role in the higher-degree alchemy. Black is a color of the initial stage of the prime matter, experienced as melancholy. It transforms into white – the silver and lunar state of matter. And finally, it sublimates into red – the golden, solar state of matter.

In Elżbieta Banecka’s art, we can find the Eastern dichotomy described by Dorota Folga-Januszewska as light versus darkness, but also rawness, discipline, wabi-sabi, and at the same time, decorativeness, the splendor of gold, and the richness of detail. The substantiality of the world melts away in the dreamy meditation. The moment gets frozen. 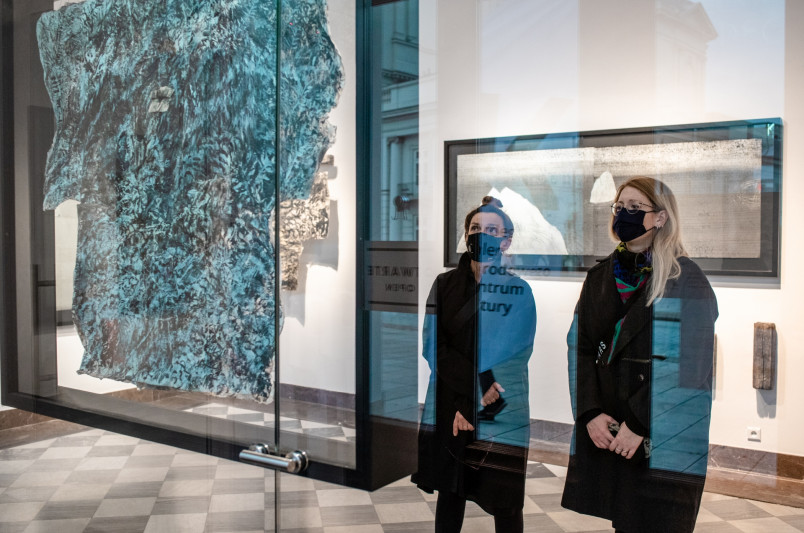 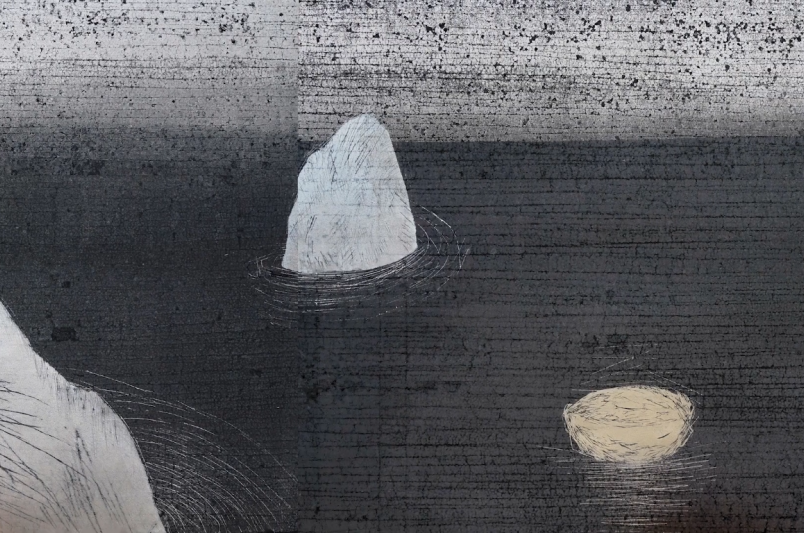